Before the Paypal mafia, there was the Fairchild Semiconductor mafia. From Fairchild, we have Silicon Valley: Intel, AMD, & firms from Sequioa to KPCB. 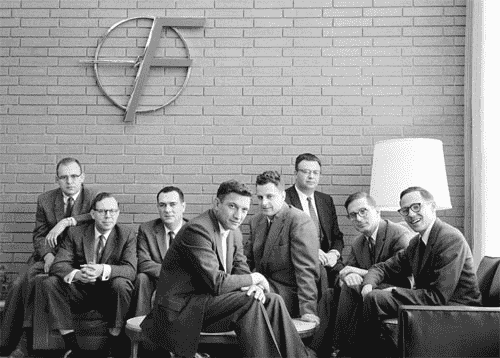 Arthur Rock, one of the first VCs, was instrumental in seeding & starting up Fairchild Semiconductor. From 1961-1968, he returned $100mm on $3mm invested.

Why he quit investment banking on Wall St for the barely named ‘venture capital’ in the 60s:

I wanted to do more of these venture capital type deals, but the money was all in the east. The scientists who had moved from the east to the west had all the ideas. I saw a great opportunity in bringing the East Coast money out backing these people on the West Coast.

Tom Perkins on a philosophy I heard Josh Wolfe echo on InvestLikeTheBest:

“My idea in everything has always been to try to put the risk up front … and get rid of the risk as fast as you possibly can.”

We changed the business plan. I persuaded them to do it a different way, to subcontract the experiment to two different institutions.

By subcontracting, Tom Perkins eliminated the need to buy equipment, build a lab and hire staff. The estimated $3M startup costs were reduced to $250,000. Kleiner Perkins put up the money and Genentech was in business.

Sequioa founder Don Valentine on his approach when investing:

“These are very fragile companies with a lot of things missing and the approach we have always taken is, If we make this investment, is our rolodex strong enough to help these people?”

Underscores that this is such a relationship driven business. Keith Rabois on monopolizing, packaging, recruiting talent echoes Valentine:

What I'm often doing when I get involved in a company is helping founders recognize where the misssing gaps in their DNA vs. their vision are.

And they may not have the network that has these superbly talented people. For example, if you're an early stage engineer and you need a finance guru, you may not know someone who's a CFO. I know lots of CFOs, I've interviewed tons of CFOs, I've worked with lots of CFOs. A critical success actor for a company is a CFO or general counsel. I have that network, I can help evaluate people and build that gap.

When Don Valentine started investing, he’d already spent 13 years as an operator, including as an early executive at Fairchild and then National Semiconductor. Tom Perkins spent years as an engineer then manager at HP.

Goldmine –– the transcripts at length: https://sirismm.si.edu/EADpdfs/NMAH.AC.1467.pdf

The Don Valentine ones (esp. part 3) are great for how tactical they are - ex. how he approaches board meetings, etc.